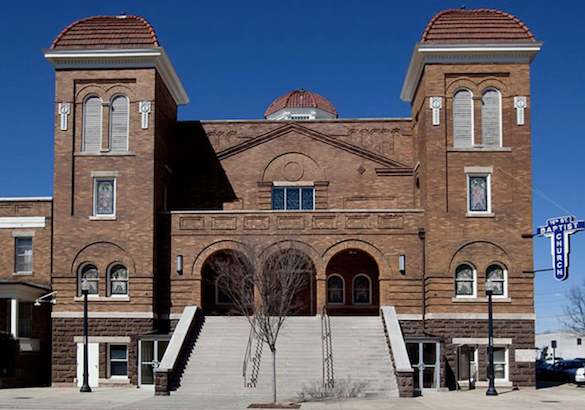 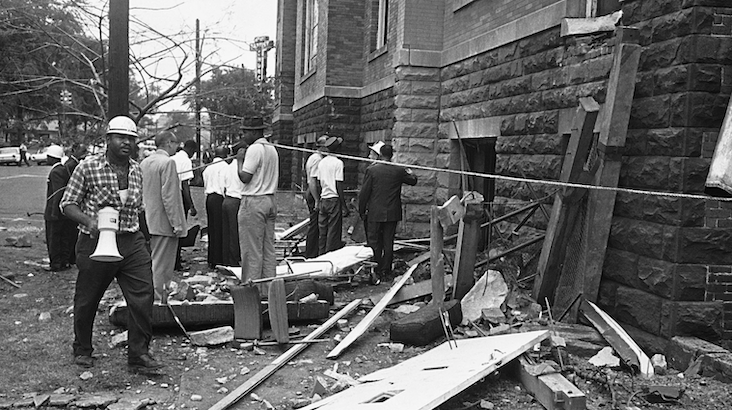 Investigators search for clues in the aftermath of the bombing. 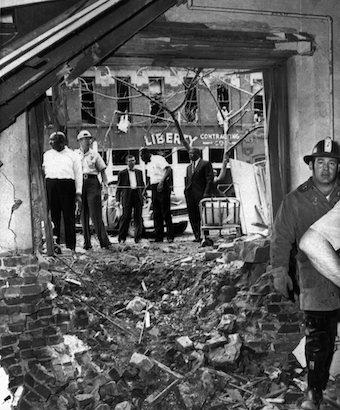 The bomb killed 4 children and injured 20+ others. 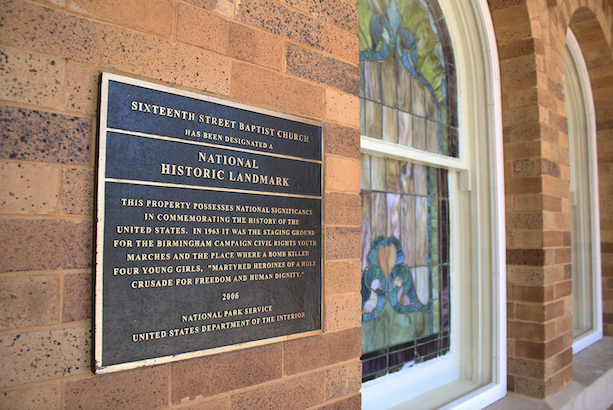 In 2006 the church became a National Historic Landmark 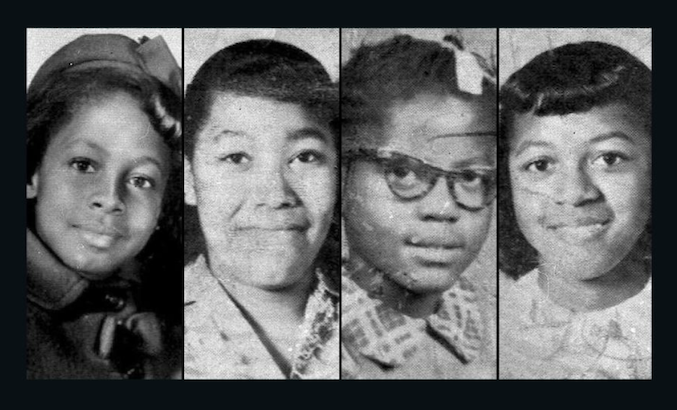 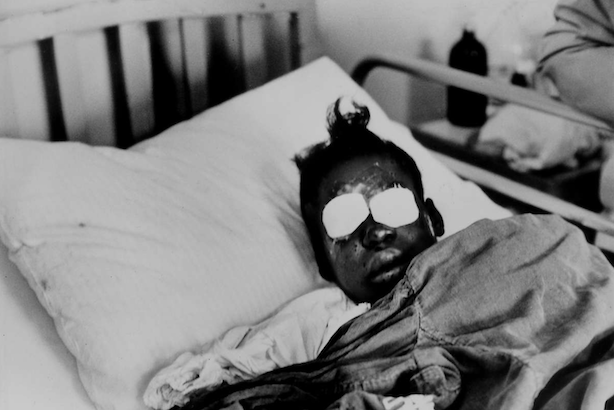 12 year old Sarah Jean Collins was blinded in the attack. Her sister was one of the four who died. 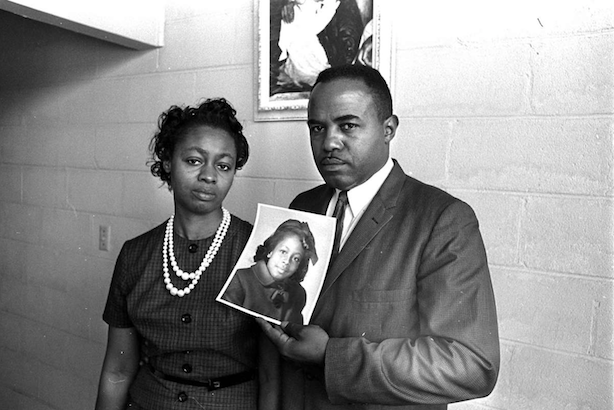 Parents of Denise McNair who was just 11 when she was killed.

Just after 10am on the morning of Sunday, September 15, 1963, families filed into the 16th Street Baptist Church in the heart of Birmingham. In the basement of the church, 5 girls were in a bathroom changing into their choir robes when the unthinkable happened. A huge explosion caused by more than 15 sticks of dynamite ripped through the side of the church near the bathroom where the girls were changing.

Immediately hundreds of people rushed to the site of the explosion and began to help those who were injured and search for survivors in the rubble. Unfortunately, five of the choir girls were killed by the force of the explosion - Addie Mae Collins (aged 14), Carol Denise McNair (aged 11), Carole Rosanond Robertson (aged 14), and Cynthia Dionne Wesley (aged 14). The fifth girl who was in the basement at the time of the explosion, 12-year-old Sarah Collins, survived the explosion but suffered life-long injuries including being blinded in one eye.

In the months prior to the bombing, racial tensions had been growing more and more tense. The attack on the church, which had an overwhelmingly Black congregation, caused further unrest among the diverse residents of Birmingham. Within hours of the bombing, two Black boys under the age of 18 were shot and killed in Birmingham - one by a police officer and one by a 16-year-old white boy named Larry Sims who was on his way home from an anti-integration rally.

Two dozen FBI Agents were sent to Birmingham to investigate the bombing. Within days, focus was on a sect of the KKK called The Cahaba Boys, a group of about 30 men who felt that the KKK itself wasn't being divisive enough in its actions against non-white races. On September 29, 1963, Cahaba Boys members Robert Chambliss, John Hall, and Charles Cagle were charged with illegally possessing and transporting dynamite and each received $100 fine and 180-day prison sentence, though no federal charges were filed against them. FBI agents claimed that due to lack of concrete evidence and not being able to use some of the evidence that they had uncovered in court, they were unable charge the men with anything more serious.

The bombing gained world-wide attention and furthered support for the Civil Rights movement in the United States. Less than a year after the bombing, the Civil Rights Act of 1964 was signed into law. In the 70's a newly elected Attorney General of Alabama named William Baxley re-opened the case files and was able to find evidence from the original FBI files that allowed him to charge and prosecute the suspected ringleader of the bombings - Robert Chambliss. Robert Chambliss was found guilty of first degree murder on November 18, 1977 and was sentenced to life in prison. On May 16, 2000, almost 37 years since the bombing, two additional conspirators were arrested for the bombing - Thomas Edwin Blanton and Bobby Frank Cherry. A fourth Cahaba Boys member, Herman Cash, was also suspected of being involved but had died before charges were brought against him. Thomas Edwin Blanton and Bobby Frank Cherry were both separately found guilty on four counts of first-degree murder and sentenced to life in prison.

The bombing and death of the four girls has long been credited with being a major catalyst to Civil Rights progress in the United States. The damage done to the 16th Street Baptist Church bombing was repaired and in 2006 the church became a National Historic Landmark. On May 24, 2013, the four girls who died were awarded the Congressional Gold Medal by President Barack Obama.

The 16th Street Baptist Church is located in downtown Birmingham, Alabama on the corner of 6th Ave and 16th St. The historic church offers tours to those looking to learn more about the events that took place here, more information about tour scheduling can be found on the church's website, linked below. When visiting please remember to be respectful and mindful, the church is still an active place of worship and the place of a major tragedy that is still raw in the hearts of the community. 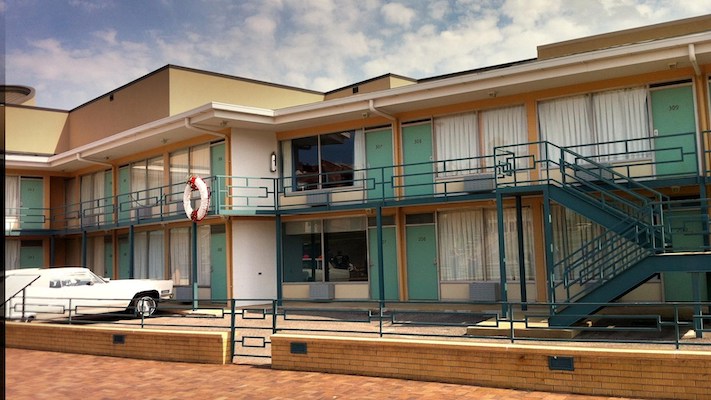 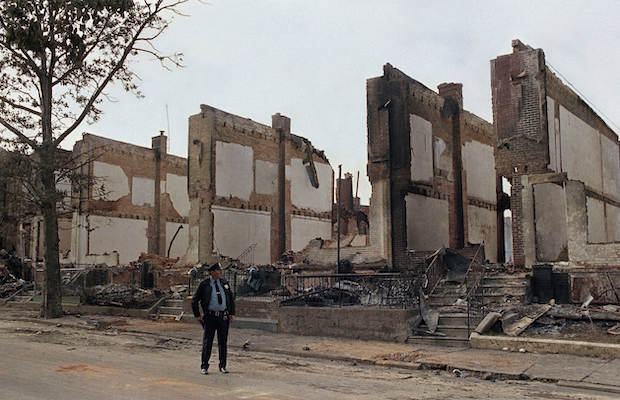